When everybody’s somebody, nobody’s anybody! D-Day 75th and the brass hats

We made it through the various D-Day commemorations without Governor General Julie Payette showing up wearing her NASA Medals or breaking any medals wearing rules which is a relief.
That being said, we had a flood of emails asking about the sash being worn by Honorary Lieutenant General Richard Rohmer, who has been featured on this blog several times before. As we have noted in the past, we have great respect for the Honorary Lieutenant General’s valorious service in the Second World War and his contributions to Canada over his long and highly accomplished lifetime.

What we take issue is with his penchant for wearing his medals incorrectly – and wearing unauthorized medals. An officer, gentleman and an one of Her Majesty’s Counsel Most Learned in the Law (he is a lawyer and a Queen’s Counsellor) one would assume that Rohmer would know that even he has to follow the rules and regulations set out by the Government of Canada as managed by the Governor General’s Office. No sadly he does not, so during the 75thanniversary of the D-Day landings the CBC and other networks were full of images of Honorary Lieutenant General Rohmer parading around wearing a mystery sash, too many neck gongs, at least one unauthorized/ unrecognized medal and some weird looking pin with a trillium on it.

First let us address the mystery red sash. What is it? Has Rohmer been made a Grand Cross of the Legion d’Honneur or a Knight Grand Cross of the Order of the Bath or a Knight Grand Commander of the New Zealand Order of Merit– it is none of these as they are worn over the right shoulder and not the left. A search of the Canada Gazette, where all authorized foreign decorations and orders are listed when they are properly awarded to Canadians, fails to reveal that Rohmer has been awarded anything new. Could it be that as an honorary Lieutenant General, Rohmer has decided that he can wear an CAF Infantry Sash over the left shoulder given his years of service in the CAF?

Now let us examine Rohmer’s impressive group of mounted medals. Right beside his St. John Ambulance Long Service Medal (black and white ribbon with 3 bars), there is a blue ribbon with a yellow stripe – it looks much like the Royal Canadian Mounted Police Long Service Medal – yet Rohmer never earned the RCMP LSM, so it is not that. A search of Rohmer’s Wikipedia page reveals it could be the United States Navy Distinguished Marksman Ribbon which he earned long ago, but that award doesn’t come with a medal. So it must be the Toronto Emergency Medical Services Long Service Medal. Totally unauthorized for wear along with officially granted federal and provincial honours, this lustrous medal is struck in high quality aluminum foil and dipped in clear nail polish to give it an impressive shine.

Of course the wearing of this medal along with officially granted federal and provincial medals is a violation of Order-in-Council 1998-591; but hey, Rohmer is already breaking a host of rules (only two neck badges are to be worn in RCAF DEU) covered in A-AD 265 Canadian Armed Forces Dress Instructions, that everyone else is supposed to follow if they are wearing a CAF uniform, but it seems having a load of gongs and a heavy brass hat means you are immune from the rules or a watchful RSM or even our  Chief of Defence Staff.

Then there is the badge on the pocket that Rohmer is wearing above his Order of St. John breast star. There is the Minister of Veterans Affairs Commendation, and RCAF Ops Wings which are all legitimate and authorized, and then the mystery oval pin. It looks like some sort of Ontario awards with a white trillium – 75 years of safe driving of a motor vehicle? 75 years of residency in Ontario? The award for not picking trilliums in Ontario? Just what is this mystery badge? 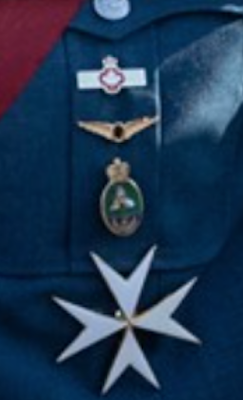 All this is written fully expecting a number of irate emails from readers chastising us for DARING to question such a notable and well regarded veteran. Well even the highly accomplished and high ranking are open for criticism if they break the rules the rest of the Canadian public are supposed to follow.

This is all best left to Rohmer himself. In a January 2019 article carried in Zoomer Magazine. Rohmer notes “I’m the most highly decorated citizen in the country. It takes me 20 minutes to put the medals and decorations on.” Well aside from the grandness of the statement (one would never expect to hear the great Canadian exemplar of medal wearing, Major General George Pearkes, VC, PC, CC, CB, DSO, KStJ, MC, CD, CdeG, to utter such a phrase), I think you get the general idea (pardon the pun) that the General knows exactly what he is doing when he puts on a uniform – be it is RCAF, Ontario Provincial Police or Toronto EMS uniforms.
Posted by Inspector General at 9:01 PM 1 comment: