A number of PPCLI friends posted to Alberta have been calling for a post about all the "funny" medals they see being worn in their adopted province. Each time a Chief of Police of Fire Chief holds a press conference we are treated to a variety of unrecognizable ribbons. Just type "Alberta" and "Medal" into google and marvel at the host of poorly designed, completely unofficial medals that are being conferred upon residents of the province for all manner of government and  protective services. This is a topic briefly we examined in the blog back in May 2016.

It really is the wild west of medal invention and wearing when it comes to Alberta. The protective services seem to be spending a great deal of time fussing over buttons, ribbons and bows. Everyone seems to be getting into the act, not just the provincial government, but municipalities of every size seem to want to become like old European city states and Grand Duchies, conferring baubles on all who render even modest service. None of this would really be worthwhile commenting on if it wasn't for the fact that these popcorn medals are being worn alongside official national and provincial honours -- which is, as we point out with great regularity, a violation of Order-in-Council 1998-591. It is made all the more offensive in that the people who are most frequently doing this are police, fire and peace officers -- people who are supposed to be trained to enforce & follow the laws and regulations of the land.

The province of Alberta established a pair of medals; "The Alberta Peace Officer Long Service Medal" and the "Alberta Solicitor General Long Service Medal." Never mind that most people who are eligible for these medals are already entitled to the Peace Officer Exemplary Service Medal, which is given out by the Governor General to peace officers across Canada. It seems one medal is not enough for the same sort of service -- and everyone wants to look like a "hero" or worse yet, a dictator from a less developed country.

Aside from the totally uninspired design -- you would think putting the word ALBERTA on the front of a medal once would be sufficient, but, to assure the wearer that they know from which province their popcorn bauble emanated, the name of the province appears twice on the same side -- there is the problem that for the Alberta Peace Officer Long Service Medal, the ribbon is a direct rip-off of the 1899-1901 Queen's South Africa Medal, which was awarded to various British and Commonwealth troops who served in the Boer War. It really is just cheap and cheesy to steal the ribbon from a war medal (about 7,000 Canadians fought in the war and 267 died). 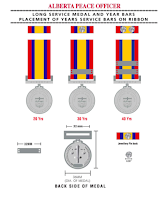 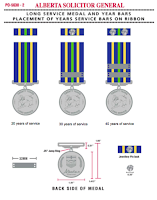 Sadly the festival of popcorn medals has trickled down to municipalities and also to individual police forces as well. There is the Lethbridge Regional Police Medal (given for 15 years of service), and a host of baubles from the medals crazed Calgary Police Service, where it seems everyone in uniform has at least two medals -- usually less than half are actual official national or provincial honours that you are permitted to wear (Halloween exempted). You can see the beautiful quality of the Calgary Police Long Service Medal... freshly cast in lead and then wrapped in aluminum foil here on the right.


This collage of mysterious municipal medals would not be complete with out the various medals for fires. There is the Town of Slave Lake Medal of Honour, for the 2011 Fire, and then the Regional Municipality of Wood Buffalo Fire Medal for the 2016 Fort MacMurray Wildfire. These are first natural disasters in Canadian history to warrant the creation of a series of municipal honours it would seem.

Not to downplay the significance of the devastation that was suffered, or the exemplary character of those who fought the flames, however, it seems rather grand to be issuing medals for natural disasters. To get the Medal from the Regional Municipality of Wood Buffalo you had to serve 100 hours. You can read all about the "program" and the design on the municipalities website. Thankfully the website notes that the Wood Buffalo Medal is not an official national honour -- but it begs the question, why then put it on a ribbon when you know people are going to mount it alongside their other medals with the help of some overeager medal mounter who wants everyone to look like Idi Amin.

Posted by Inspector General at 4:37 AM 3 comments:


After more than 80 emails over the past year -- half of which have come in since our new Governor General took office -- we will be updating Wearing Your Medals Wrong, over the coming weeks. Don't worry, you will soon be able to feast your eyes upon all manner of medal wearing offences being committed by a host of Police Chiefs, Veterans, and yes even Her Excellency the Right Honourable Julie Payette, who has an otherworldly approach to wearing orders, decorations and medals.

Thanks to all of our readers for your patience and for sending in so many useful photos. Remember, when in doubt, if it is not included as part of Order-in-Council 1998-591, or the updated list maintained by the Governor General's Office, then you most likely shouldn't be wearing it. While it is a pretty easy rule to follow, it seems the higher the rank, the less likely some are to follow the rules. For wearing insignia there is the Guide for Wearing Orders, Decorations and Medals, which covers all the usual questions. It doesn't matter who you are, how much brass you have on your hat or gold you wear on your cuff, you are supposed to follow these rules too. 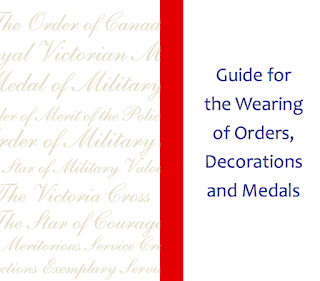 By the end of the month we will also have an updated Vice-Regal Report Card, which we have not done in more than three years.
Posted by Inspector General at 2:59 PM 2 comments: