A few readers sent us this photo of the now former President of Queen's University, Dr. Daniel Woolf, wearing what appears to be the United Nations Korea War Medal. Given that Dr. Woolf's biography states he was born in 1958, we are not quite sure how he managed to serve in the Korean War with US or Commonwealth troops. 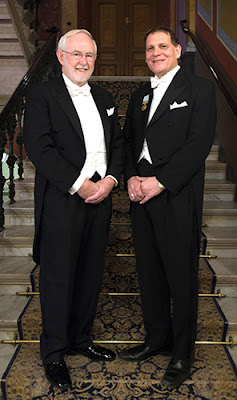 Woolf all dressed up with Arthur McDonald, a Companion of the Order of Canada, who also received the Nobel Prize;  it is a bizarre image. This photo was taken in December 2015 with Professor McDonald was presented with his Nobel Prize.

One can only imagine what the King of Sweden, Carl XVI Gustaf, who knows a thing or two about medals, thought of the Canadian university administrator parading around with a lone medal he could not have possibly earned. Not exactly an effective way of looking "important" in a auditorium filled with a few Heads of State and some of the most highly honoured/decorated people in the world. Perhaps a university scarf of jersey would have been a more effective way of announcing the crowd "look at me, I'm important too."

You really shouldn't wear medals you didn't earn, even if you're putting them on the right hand side of your jacket.
Posted by Inspector General at 5:54 PM 2 comments:

This report is a bit late, but it will certainly be of interest to our loyal readers. It is that time once again to grade the various professional medal wearers; the Governor General and the Lieutenant Governors from across Canada. We won't look too deeply into the sad situation of the Governor General here. On the whole the Lieutenant Governors are doing a solid job of wearing their medals correctly.


The main offender in the provinces is Alberta's Lois Mitchell who seems to enjoy wearing all sorts of different capes! Rule number one of wearing robes/capes/mantles, you don't pin medals on them and you don't wear mayoral or Order chains over top of them -- unless you want to look really really strange and desperate to appear more important than you are. You also don't wear multiple Orders on bows. Where is a slightly knowledgeable ADC or RSM when you need one?

As we saw in a previous post Alberta really does seem to be the "wild west" of wearing medals and wearing all sorts of fake municipal and provincial medals.

The new Lieutenant Governor of Saskatchewan Tom Molloy, is a quick study and after his installation seems to have corrected the "olympic medal" style of wearing his neck gongs. Great improvement here.

Similarly the news Lieutenant Governor of British Columbia, Janet Austin is doing a great job wearing her medals -- not sure what the deal is with the Presidential salute though! Of course there remain a few outliers -- the LG of Prince Edward Island doesn't seem to wear medals at all.
This is the most solid report card we have had since we started this blog in 2010 in an effort to combat the habitual rule breakers. 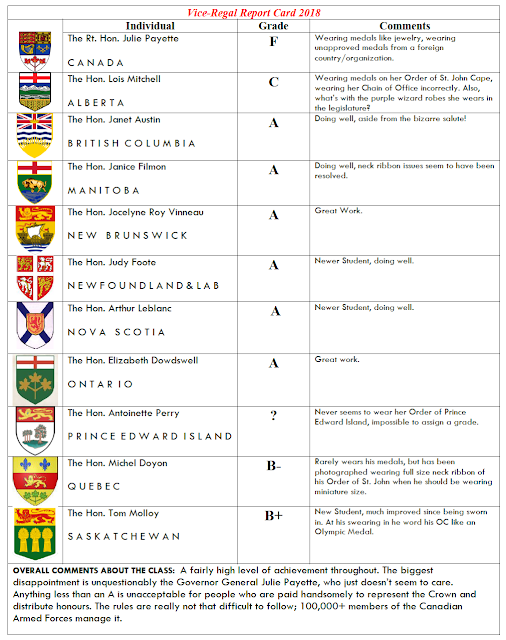 With Bob Paulson gone as Commissioner of the RCMP the wearing of unapproved/fake medals (aside from the Governor General according to media reports) has come to a end for the time being at the top of Canada's national police force.